Wondering what the CPA exam pass rates are—and what your chances of passing might be?

The cumulative CPA exam pass rate averages between 46-60% across all sections in 2019 and 2020, with some sections having much higher pass rates closer to 60%.

How is the CPA Exam Score Calculated?

9 out of 10 Candidates Pass with Wiley CPA Review Courses

The highest pass rate recorded between 2017-2020 was 63.04% for Q3 of 2019 of the BEC section—and the lowest was a 40.57% for Q4 2019 FAR section. However, a recent NASBA candidate performance report stated that test takers 23 years old or younger had a 60% pass rate. This suggests students and recent graduates have an advantage in passing the exam due to their recent review of key concepts and their recent study practices. However, despite your age or proximity to graduation, studying with a trusted CPA exam review partner is highly recommended to increase your chances of passing the CPA exam on your first time.

We’ve compiled AICPA’s reported pass rates from the past four years to provide insight into:

It takes a lot of study and practice to pass the CPA exam, but it’s not impossible. Check out the break down below by section and quarter of the percentage of candidates who passed the exam in 2019 and in the first quarter of 2020 to get an idea of how you might fare. Overall, nearly 50% passed the exam in all sections in those years, with some sections having much higher pass rates closer to 60%.

In 2019 and 2020, the CPA exam pass rates show that more candidates pass the BEC section than any other, with FAR having the lowest CPA exam pass rates across the board. Thus, you may conclude that FAR is the hardest section to pass and BEC is the easiest, but it is to be noted though, that the AICPA highlights one reason BEC is higher is that it is the section most commonly taken last, giving students more familiarity with the subject after taking other sections. But do keep that in mind as you schedule your exam and decide whether to tackle the hardest or easiest CPA exam section first, and consider building a personal schedule that takes into account that the FAR section has the most study content.

When you’re ready, here’s how you can schedule your CPA exam.

As mentioned above, students might fare better on exams than older candidates—sometimes by as much as nearly 20% better on average. Here’s a breakdown of three years of pass rates based on the age of the candidates so you can see where you might fit in.

How is the CPA Exam Score Calculated?

It’s important to understand how the exam is scored so you can plan your CPA exam prep for each section and learn how to pass the CPA exam.

For each section of the exam, your score will be between 0 to 99. To pass a section, you need a minimum score of 75.

Note that your score is not a percentage, and it should not be interpreted as such. Scores are not curved.

Some key takeaways on how the CPA exam is scored:

Scaled scores on the MCQ and TBS portions of the exam are calculated using formulas that take into account factors such as whether the question was answered correctly and the relative difficulty of each question.
Scoring is fully automated for all exam components except the written communication tasks. Most written communication responses are scored by a computer grading program, which is calibrated using human scorers.
Pretest questions are included in every exam (they may be multiple-choice questions, task-based simulations, and one written communication tasks) only for the purpose of collecting data.
Multiple-Choice (MC) Testlets are classified as either medium or difficult based on the average difficulty of the pre-selected panel of questions within that testlet. The first MC testlet is of medium difficulty, and the second testlet may be the same or more difficult depending on the performance in the first testlet, as only the first testlet is adaptive. All testlets have questions ranging in difficulty.
According to the AICPA, the passing score for the CPA exam is determined by their Board of Examiners (BOE), who consider many factors and input from others like, NASBA, consultant psychometricians, the academic community, and licensed CPAs, when making decisions.

For more insights into how candidates have done historically on the CPA exam, check out the charts below for 2018 and 2017.

For 2018, BEC is consistently again the section with the highest pass rate, with the second quarter also preforming well overall. It should be noted that for all sections, the second and third quarter had higher pass rates than their first and fourth counterparts.

While scores can vary from year to year and quarter to quarter, it can be helpful to see the overall picture of the trends for overall CPA exam pass rates to get a more accurate view of what your chances of passing are.

Overall, from 2017 to 2019, the AUD pass rate increased slightly each year, while the BEC, FAR, and REG sections had larger jumps between 2017 and 2018 before leveling off.

For 2017, CPA passing scores were lower overall in comparison to more recent years, and even the second quarter took a hit with lower than average pass rates. 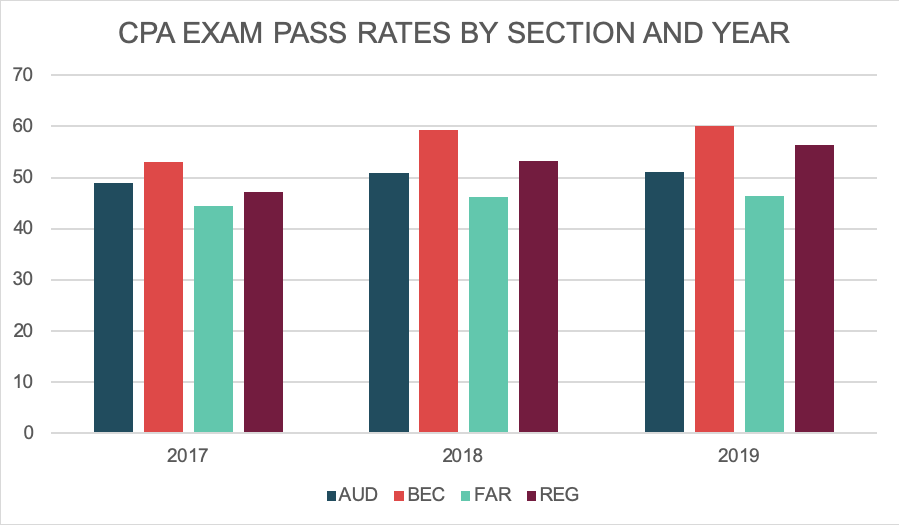 Now that you’ve seen what the pass rates look like, you might be wondering, when is the best time to take the test for the best CPA exam results? Some quarters have historically performed better than others; however, the game has changed now that the CPA exam testing windows have been replaced with continuous testing (as of July 1, 2020). So, the best time to take the exam will be more of a personal choice–work schedule, life schedule, etc. 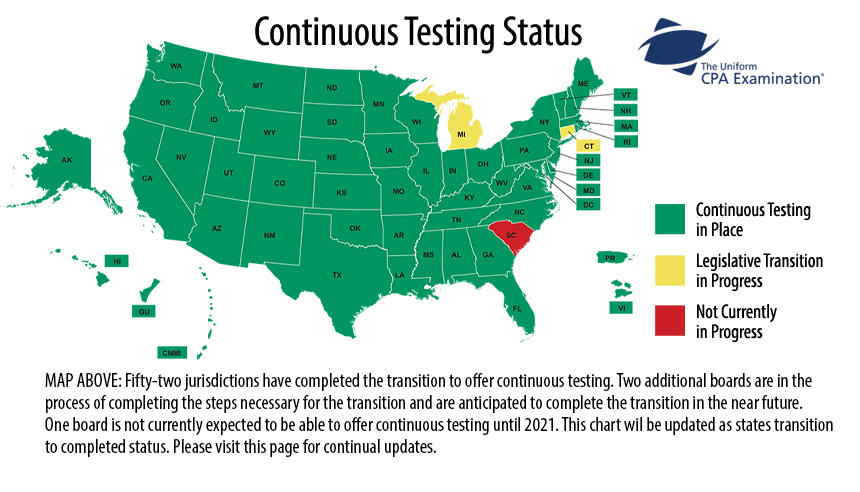 Some highlights about Continuous Testing:

You can now take it year-round with no exceptions.
You’re able to test more frequently.
If you receive a fail score, you can retake a section without restrictions.
Retake sections while content is still top of mind – may shorten time needed to pass all four parts of the exam.
Continuous Testing replaces the CPA exam testing windows, which had only permitted candidates to test during designated time frames each calendar quarter.

Overall, passing the exam will come down to your chosen CPA Exam Review Course and how much effort you put into studying and preparing—as those are the best indicators of success. For more on Continuous Testing and scheduling your CPA exam, visit our CPA Exam Schedule Guide.

Awaiting your score can be a tense time, but you can find the target release date for scores based on test date by visiting the CPA Exam Score Release Dates page.

9 out of 10 Candidates Pass with Wiley CPA Review Courses

Wiley’s CPA Review Courses are taught by expert instructors and come with FocusMe TechnologyTM, an adaptive feature that learns your problem areas and helps you address them as you move through practice problems. Plus, with more test questions and task-based simulations than any other course provider, our CPA review mimics the actual exam and provides unique, customized questions to improve your scores.

With Wiley CPA Review Courses, you get:

Find out how well prepared you are for the actual exam using Wiley’s Free CPA Practice Exam.