Olu Egunjobi, 29, lives in Boise, Idaho, and just finished his master’s degree in Accounting from Boise State University as well as his BA in Accounting. At the same time, he cruised through the battery of the CPA exam. Originally from Nigeria, Olu came to the United States in 2015 to attend school. And while he planned on returning to his native home after finishing, he met a girl, fell in love, married, and had a family. What is Nigeria’s loss is clearly our gain.

When we spoke, Olu was on a brief and much-needed break between attending school and going to work. A prestigious accounting firm, Ernst and Young, offered him a job as an Audit Associate, which he’ll be starting in a few months. In the meantime, he’s applying his valuable accounting skills to temporary consulting projects, including working on the CARES Act, helping small businesses process loan applications. Olu likes to get things done.

Staying Consistent Through Times of Change

“I’m the type of person that does better when I have a lot on my plate,” he says. “I have to be in attack mode. Even with school, I’m much more likely to do well if I’m taking 15 credits than if I’m taking three credits. I do much better on a compressed timeline with a lot of things to do in a short period of time. And so that’s why I took that approach with these exams.”

That hyper-focus meant Olu had effective retention of the material. “I figured it’s best to do everything in a short period of time when I still remember the concepts,” he says. “If I stopped studying and then four months later I have to take the test, I might forget what I learned in the beginning. So, while it is still fresh in my brain, I try to take advantage.”

Olu began studying for his CPA exam in August and was finished with his four exams by the end of the following May. He set the pace for a quick exam experience. He first took FAR in October and then Audit in November. “I was in school at the time, taking an Advanced Audit class,” he says.

“It made sense because I was using the Wiley materials for my class. Putting those two things together really helped me with getting through all of the studying.”

Olu then studied a few more months and took BEC in February, leaving REG the last remaining exam, which he set for April. “Of course, with the coronavirus, it was canceled originally, so I just had to keep scheduling and rescheduling until something opened up.” Olu finally settled on a date in late May. He had to drive five hours to get to an available testing site. (Find the latest CPA exam dates and what you need to know about scheduling your exam here.)

His condensed approach to taking the exams proved successful. On FAR, the one exam he exclusively used Wiley materials he scored a 95. “I was very excited about that, especially because it was my first one.” For Audit, where he combined Wiley and Becker materials, he scored a 91. For BEC, where he used both resources, he scored another 95, and for REG he received a 93.

Is Wiley better than Becker? Read Olu’s honest review of the two.

So, in the end, would Olu recommend a compressed approach to take the exam?
He hesitates before answering. “Well, I don’t know,” he says. “I would have to say it depends on the person. Some people feel better when they are loaded down with responsibility, and some people like to be more organized and measured when they have something like this on their plate. Results may vary!”

Consistency at the Heart of Building a Successful Study Plan

Olu’s way meant studying consistently every day. “For me, I used Wiley, of course, and a questions-based approach. Studying basically meant going through all the questions. I was not actively sitting down and reading all the material several times. I quickly studied the book, watched the lectures at double speed, and took a few notes. Then I just focused all my attention on covering the sample questions.”

Since Olu had the Wiley material while still in school, he also used that material to aid his undergrad and graduate studies. “If I needed help on a topic, I would just go to my Wiley guide and see how they presented the material. I eventually knew that I’d be studying the same material for the CPA exam. So why not just start using it for my school stuff?”

Though he also used Becker as a study supplement, his utilization of the Wiley CPA product facilitated his success. For now, though, he’s just happy to be done. “When I checked my score, every time it was such a huge relief,” he says. “Each time, I felt like a weight was taken off my shoulders. There was no screaming and shouting–just relief that I don’t have to study for any of this again. It’s a really good feeling. I actually don’t have anything to worry about!”

Are you ready to accelerate your journey to becoming a CPA? Start today and get 14 days of free access to our most popular Wiley CPA Review Course.

Comments Off on How One Candidate Passed All 4 Parts of the CPA Exam in under a Year| By Keri| Posted in: CPA 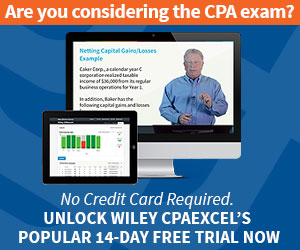 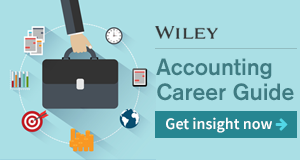