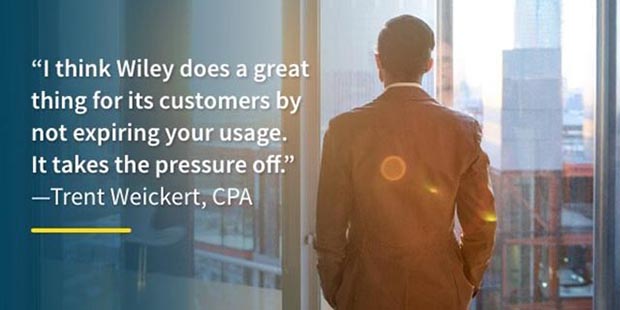 Trent Weickert, CPA, now sees the light at the end of the tunnel.

Trent Weickert took a chance. He had a good job when he decided it was time to tackle his CPA Exam. Already an insider, Trent had a good view of the field, especially in auditing, and he was rubbing elbows with lots of accomplished CPAs. Still, preparing for the exam would be lots of work, when he was already doing lots of work … at work.

Trent graduated from Ohio State University back in 2014, crammed some extra accounting hours after graduation to get up to speed (having chosen his accounting major late in the game), then got a job as an auditor at a public accounting firm in Columbus. Boom! He’d made it. Sort of.

Then there was the matter of getting those three little letters after his name. “Once I hit 150 credit hours after graduation,” he says, “I started to study for the test.” One thing he did notice was many of his colleagues were also preparing for the exam. Many, in fact, were using Wiley materials. “I actually started using Wiley because I noticed a co-worker was using Wiley,” he says. “I was motivated to earn my license,” he says, “but I wasn’t racing the clock. I already had a full-time job. I planned on getting through it comfortably. I wanted to plan for the long haul.”

The pass guarantee proved valuable. “I think Wiley does a great thing for its customers by not expiring your usage. It takes the pressure off,” he says. It took Trent a few tries at a couple of parts of the exam, so he was able to have his study materials handy for those times he needed to go back and review the things that held him up the first time.

“The part of the product that was most effective for me was the ability to complete as many questions as possible,” Trent says. “It was an easy way for me to do questions at the blink of an eye. I used the app a lot. While making dinner I could answer five questions. While in the car I could do ten questions. That repetition really did it for me. That’s what stayed with me the best. I never ran out of questions.”

When he passed, he had a mix of emotions. “You’re not done when you get through the exams,” he says. “There are other hoops you have to jump through, as most people know. Yeah, it was exciting to get those passing grades, and fortunately, you can see the light at the end of the tunnel. But, you’re not there yet!”

Finally obtaining his license has impacted Trent at work. “It really had a positive effect on my career,” he says. “With that license, it shows my progress and tells my colleagues and managers that I’m doing good work at my job. Internally at my firm, I had been given more responsibility even before earning my license. But this was just another way of gaining people’s trust. Overall, it gave me added credibility within the firm and now it keeps opening more doors for me.”

Start Your Journey to Becoming a CPA